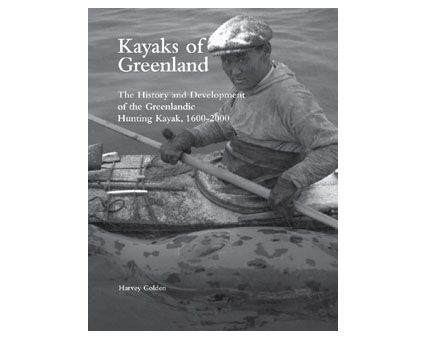 The History and Development of the Greenlandic Hunting Kayak, 1600-2000

The ancestors of the modern Greenlanders have inhabited Greenland and used kayaks there for a millennium. During that time kayak designs have changed in response to migrations to lower latitudes, a changing climate, and cultural influences.

KAYAKS OF GREENLAND documents the broad diversity of kayak types from Greenland as well as thier history, development, function, construction and how the various types relate to each other. Harvey Golden has studied over 100 Greenland kayaks in museums and private collections and has brought this research together in this heavily illustrated volume highlighting the trends and variations of Greenlandic kayaks over the last 400 years.

Golden´s experience with Greenland kayaks goes well beyond studies in a museum context; he has built and used eighteen full-size replicas of the kayaks in this study, supplementing his understandings of how these kayaks were built and how they feel on the water.

KAYAKS OF GREENLAND is a in-depth look at the construction, design, variation, and evolution of the Greenlandic hunting kayak.   The spectrum of kayak forms from Greenland is linked to pre-historic forms from the Bering Straits and is analyzed within a changing cultural and climatic context. 104 scale drawings of kayaks are presented, representing examples from the early 17th century through the end of the 20th century.   Aside from the 104 scale drawings of kayaks, there are 407 figures consisting of historic images and technical illustration.

79 paddles are also presented in scale-drawings including Maligiaq Padilla´s paddle. This paddle he used in Sisimiut at 1998 the year he became the youngest person to win the Greenland National Kayaking Champinships at age 16. This paddle was destroyed in his hands as it buckled against the ceiling during an otherwise uneventful escalator ride in Orlando Airport at 1999. Maligiaq said that the paddle was his favorite at the time, and that he had to make a new one right away at Greg Stamer`s house for paddling demonstrations. 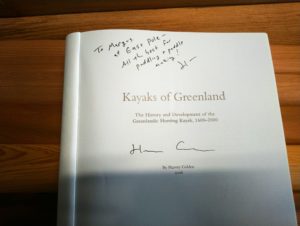 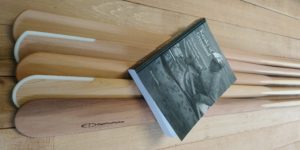